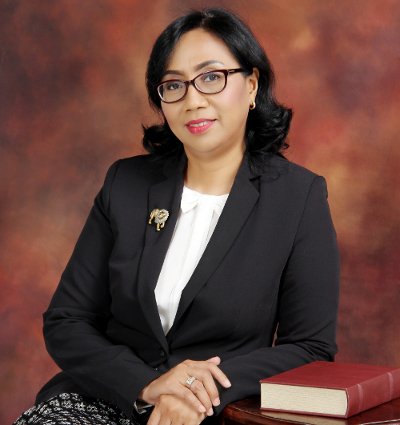 Experience and Notable Transactions:
Dyah is well known in the area of litigation and dispute resolution. Dyah has taken a prominent role in advising the Government of Indonesia along with certain ministers such as a former Governor of Bank Indonesia. Among others, she advised the Government of Indonesia on the establishment of IBRA and the draft regulation giving IBRA its powers. Dyah has also represented various Indonesian state banks in litigation matters including one high profile case involving the failure of payment of commercial paper. She also has represented state port companies and the Ministry of Forestry of the Republic of Indonesia in the Indonesian courts.

Dyah has also represented lenders in debt restructurings involving Indonesian borrowers such as Barito Pacific. Dyah is also an expert on the Indonesian bankruptcy code and has represented debtors in connection with their employees and creditors.

Dyah also focuses on Indonesian labor law and has represented large financial institutions in disputes with their employees.

Dyah also advises foreign companies in contractual disputes in the Indonesian Courts. For instance she has represented a large Japanese trading company as plaintiff in District Court of Central Jakarta.

Dyah is also an expert in Indonesian family and immigration Law and regularly handles such matters for foreign individuals on divorce, adoption, custody and other family matters.